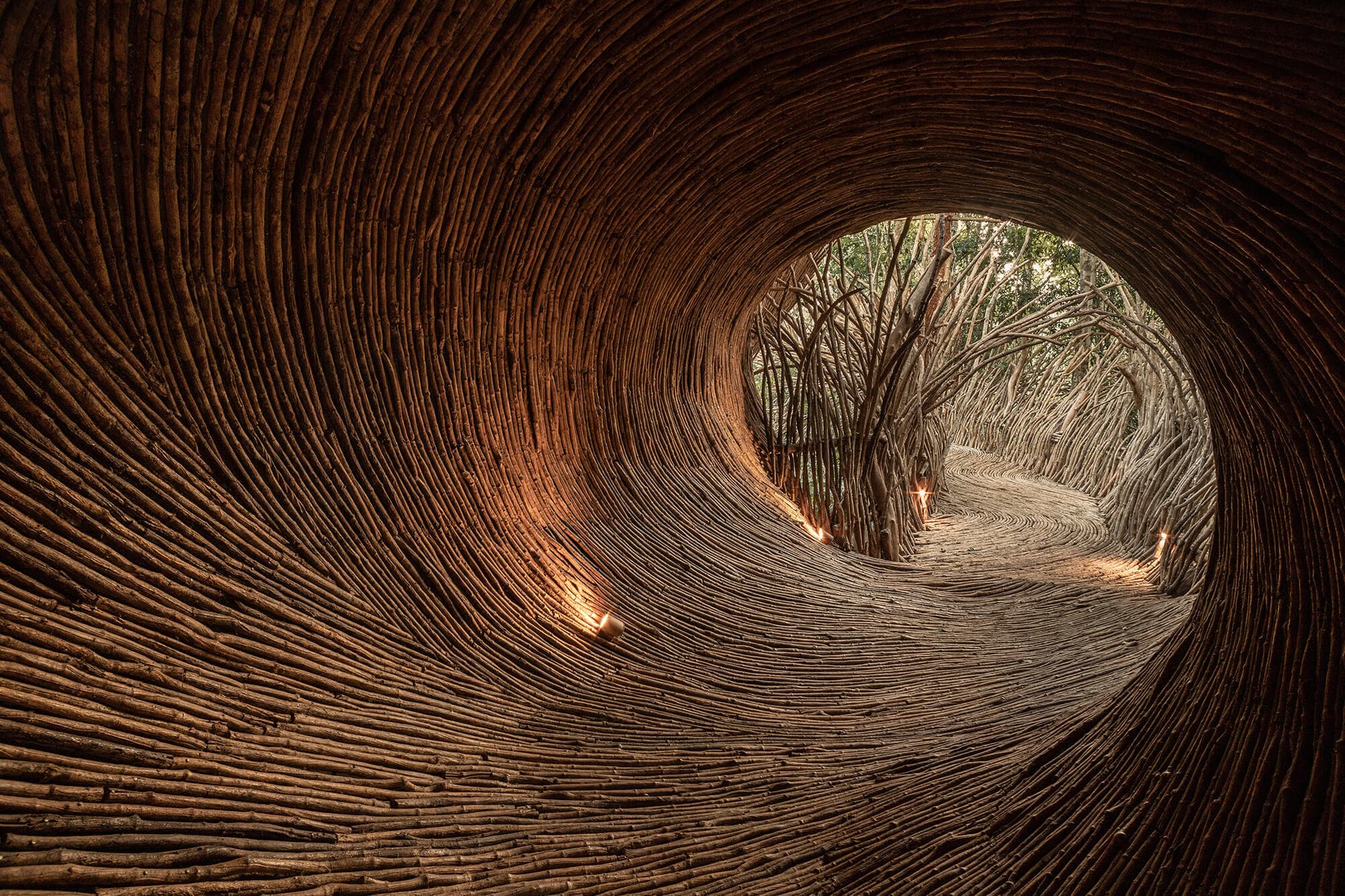 Oliver Kellhammer is an artist, writer, and researcher who seeks, through his botanical interventions and social art practice, to demonstrate nature’s surprising ability to recover from damage.

His projects explore the processes of ecological regeneration in the wake of human disturbance, either through passive field observation of biota recolonizing industrial wastelands or by actively engaging in the biological and socio-political processes that inform these landscapes. His past projects include a community access bio-materials plantation, reforestation of an eroded railway ravine where the vegetation is now protected as intellectual property and working with squatters in Canada’s poorest neighborhood to establish the country’s first public permaculture food forest and Asian ethnobotanical arboretum. His recent work has focused on the psychosocial effects of climate change, decontaminating polluted soil, reintroducing prehistoric trees to landscapes impacted by industrial logging, and cataloging the biodiversity of brownfields.

Kellhammer holds a master of fine arts in creative writing from the University of British Columbia.

He has lectured and given talks on bio-art, ecological design, urban ecology, and permaculture at universities and cultural institutions throughout North America and abroad and is currently a lecturer in sustainable systems at Parsons, New York.

Sanford Kwinter is a philosopher, writer, and editor. Equipped with a distinctive transdisciplinary approach that draws from science, technics, and the arts, he has written on design, technology and nature and helped direct generations of designers in their creative exploration of cognition, subjectivity, cultures, and environments to expand the concept of design as a transformative act integral to the dynamics of life.

He is currently Professor of Science and Design at the Pratt Institute in New York and has previously taught at MIT, Harvard Design School, Columbia, and Rice universities as well as at the Architectural Association in London and the University of Applied Arts in Vienna. He holds a doctorate in comparative literature from Columbia University.

Kwinter was co-founder and long-time editor of Zone Books and the influential journal ZONE. He was a participant in the series of cross-cultural conferences on the condition of architecture at the end of the millennium convened by ANY corporation throughout the 1990s. He is the author of over a hundred and fifty articles and essays. His books include Architectures of Time: Towards a Theory of the Event in Modernist Culture (MIT Press, 2001), Far From Equilibrium: Essays on Technology and Design Culture (Actar, 2008), and Requiem: For the City at the End of the Millennium (Actar, 2010). His many collaborative projects include Mutations with Rem Koolhaas and Stefano Boeri (Actar, 2001), the forthcoming What is Energy and How Else Might We Think About It? with Kiel Moe (Actar, 2022), and a recent series in the journal Log that implores designers to re-found their relationship with nature.

Mae-ling Lokko is an architectural scientist, designer, and educator from Ghana and the Philippines whose work centers on the upcycling of agricultural waste and biopolymer materials. Lokko holds a Ph.D. from the Center for Architecture, Science, and Ecology, Rensselaer Polytechnic Institute. Her research integrates a broad range of technical, environmental, social, and cultural criteria to question contemporary material-value systems and upcycling infrastructures to meet generative justice goals. Lokko is currently teaching at the Cooper Union and previously taught at Rensselaer’s School of Architecture where she served as Director for the Building Sciences Program. In January 2022, Lokko will join Yale School of Architecture as an Assistant Professor.

Lokko is the founder of Willow Technologies, Ltd. based in Accra, Ghana focused on the development of integrated material life-cycle design within the food, agriculture, and building sector. Her work was nominated for the Visible Award 2019, Royal Academy Dorfman Award 2020, and she was a finalist for the Hublot Design Prize 2019. Lokko’s recent projects have been exhibited at Z33 House of Contemporary Art, Design and Architecture, Sonsbeek 20-24 Biennial, Netherlands (2021), Triennale Milano (2020), 4th Istanbul Design Biennial (2018), and at the Royal Institute of British Architects-North as part of the Liverpool Biennial 2018.

Ron Finley was a successful fashion designer before he became known as “gangsta gardener”— a rebel with a green thumb. In 2010, Ron decided to plant some vegetables in his South-Central Los Angeles parkway; that often-neglected space between sidewalk and street. Soon after, he was cited for gardening without a permit by the apparent owners of those dirt patches: the City of Los Angeles. This was the beginning of a horticulture revolution. Ron fought back and won. He started a petition with fellow green activists and demanded the right to garden and grow food in his neighborhood. With the help of Council Member Herb Wesson, the law prohibiting produce gardens on Los Angeles city parkways was changed.

In 2012, he was inspired to launch the Ron Finley Project, a nonprofit organization that focuses on turning urban food deserts into food forests by planting community gardens. Since then, Finley—who grew up in the South-Central Los Angeles food desert and knows what it is like to drive 45 minutes to get a fresh tomato—has helped plant dozens of community gardens on empty lots around Los Angeles. Finley has appeared in several documentaries about urban farming, including Urban Fruit and Can You Dig This.

Roth is a self-taught architect, environmentalist, philanthropist, and entrepreneur born in Argentina and residing in Mexico. He is the founder and CEO of the AZULIK eco-resort, the architectural firm Roth Architecture, and the Enchanting Transformation Foundation, an initiative for the care of children, forests, animals, and native communities.

In recent years, Roth has gained notoriety in the world of art and architecture for projects that rely on construction techniques used by native communities and avoid the use of heavy machinery to respect ecosystem dynamics and natural topography. Roth seeks to preserve the environment in every creative journey. In all his projects, natural elements—trees, water, soil, and morphology—remain intact. The two hundred trees originally found on his property continue to thrive inside his house, as they do in both his museums. His architecture is often perceived as inhabitable sculpture, he generally builds intuitively without pre-established plans or sketches.

Roth has been actively contributing to the artistic and cultural scene in Latin America. In 2017, he designed and built two contemporary art museums named SFER IK. In 2019, TIME magazine listed SFER IK as one of the hundred greatest places in the world. The Uh May SFER IK has also won the 2020 Leading Cultural Destination Berlin Award for New Culture Destination of the Year in Latin America.